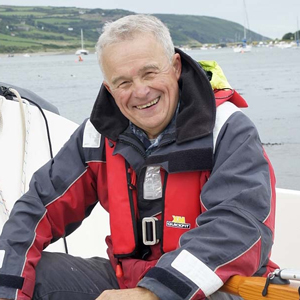 Why did you choose a Bay Cruiser 23 as opposed to other boats on the market?
Prior to buying Vagabond (BC23 number10), virtually all of my sailing had been in cruising yachts, between 35 and 43 feet long. These had either been owned by friends or chartered. During a cruise to St Kilda, I had seen a Drascombe Rally in the Minch and thought that they looked fun. As my cruising friends were selling up and developing a passion for the golf course, I thought it would be a suitable retirement project to buy a small boat and sail her round Britain. The original project was to buy an old small boat, refit it one winter and sail round Britain in the summer. I spent a bit of time reviewing the market during which my requirements became clarified.

I wanted something that was light, which I trailer behind my car and which I could, if necessary, launch, sail and recover singlehanded.  I required a cabin with cooking and washing facilities (rudimentary but functional), somewhere to store all the food and clothing and stuff  I’d need for two or three weeks on the go. The cockpit had to be roomy enough for company (I had vague ideas of teaching my grandson to sail in her) and yet could be covered with a tent, to extend the living space, where at least my wet weather gear could hang over night to keep the cabin dry. I wanted an “inboard” outboard.  I wanted a simple rig, with lazy jacks and single line reefing for the main, roller furling for the jib, with all the controls from the cockpit. As well as all this, I wanted a boat that would be easy to sail long distances in reasonable safety and be fun to sail when the opportunity beckoned. One that would sit as happily on the sand as it would alongside a pontoon.

I found that my idea of buying an old boat was becoming less attractive (apart from the financial side of things). Old boats were old designs. Heavy hulls with heavy rigs and usually with (to me) complicated sail arrangements. Then I read a review of the Bay Cruiser 23 in PBO. It seemed (in the current vernacular) to tick all the boxes and be capable of development. So I looked up Swallow Boats and found an established company of “traditional” boats with a difference.

I booked a test sail with Matt on a gusty day. The wind was F4 ish so we started with one reef and set out of the mouth of the Teifi. Then we had a force 7 gust when approaching the bar. Matt was pitched to the lee side, the boat heeled a bit and pointed into the wind. “Safe then”, I thought. Matt and I chatted on the way back to the bouy and I liked his commitment to boat design and to his company. I chatted with the guys in the boat shed and realised they were committed to what they did. The decision was made and I have yet to regret it.

How do you use your boat ?
I live in the middle of Buckinghamshire and I don’t think you can get much further from the sea in Britain! Any expedition to the water is at least a two hour drive, so having a boat permanently in one of the south coast marinas or anchorages is not really viable, particularly as half the fun of having a boat is tinkering with her, adding improvements here and there. So Vagabond lives on a trailer in a local barn, when not at sea.

Vagabond and I have just completed (mid 2014) a  voyage  “Round the Island”.  It’s taken us about 6 months, spread over 3 years. In 2012, I did over 1000 miles in her, sailing from Burnham on Crouch, along the South Coast and then up the West Coast to Balvicar on Seil Island, just south of Oban. I then collected her on the trailer and brought her back to the home port (barn) where she stayed most of the winter. In 2013 she went back to Wales for some extras and then on to Rutland Water. After another few weeks in the barn, I put her back in the sea at Burnham on Crouch and went north. 500 or so miles later we reached Lossiemouth and I took her by trailer across to Balvicar, where she stayed the winter on the trailer under a tarpaulin. In May she went back into the water and we sailed up to Fort William, through the Caledonian Canal with “Sail Caledonia 2014” and then North, to Wick and on to Stromness in the Orkneys. From Stromness, we went to Loch Eribol and rounded  Cape Wrath to turn South,  back to Balvicar.

The terrifying one was my fault but showed me just how safe a boat is the BC23. I was on passage from Holyhead to the Isle of Man, in conditions that were at the upper end of my tolerance. The forecast was F4 to 5 possibly 6 at times.  We (Vagabond and I) were two hours out of Holyhead with the F4 on our starboard quarter.  The wind rose and over the next hour or so I put both reefs in the main. The wind continued to strengthen. Moreover, this wind had been blowing across the width of Liverpool bay (50 or so miles) and had built up an eight foot swell from the same direction. The boat needed even less sail, so then only thing to do was roll up the jib. And here’s where the trouble hit. I couldn’t fully roll up the jib because I had taken a turn or two off the roller on the previous day. (That was another story). The jib fluttered uncontrollably, shaking the mast and the boat. I had let the sail down into the sea and recover it somehow. I lashed the helm centrally, let the main sail go loose and Vagabond turned into the wind. After dropping the jib into the sea, I clawed my way onto the foredeck, pulled the jib out of the water and lashed it down. Chastened, yet marvelling at the stability of the boat in these conditions, I resumed course for Peel.  Since replacing the jib control line this summer (with a length of 5mm dyneema) I have not had a repeat of this incident.

The pleasant experience was a beautiful afternoon sail on the West Coast of Scotland.  We had stopped over night just south of Crinan and were sailing north from the Dorus Mor up Loch Shuna and into Balvicar Bay for the last leg of my voyage in 2012.  Jura and the wind were behind us, ahead was the calm water of Loch Shuna.  The sun shone and sparkled on the turquoise water. We now had plenty of time and a long run ahead. I pumped out the water ballast and set the jib into a stable goose-wing. Vagabond accelerated to just over 6.5 knots. After we had passed Shuna Island, we needed to veer a bit to port to cross a piece of open water and then back to starboard to head up Seil Sound to the anchorage at Balvicar. The wind veered with us and we stayed goose-winged all the way until we came into the wind to drop the sails in the Balvicar anchorage.

Magic!  I look forward to more days like that.

How did you find the after sales care at Swallow Boats?
The team at Swallow are very friendly and helpful.  Laura is really good at sending the packages of stuff that you might need (at a price, of course!) and I find I can usually speak to Matt if a particular issue comes up about which I need some advice. In the first couple of months a few unexpected snags arose with Vagabond and Matt unhesitatingly put them put right.

As the BC23 is a relatively new design, Matt is also always seeking feedback about ways in which the production boat can be improved (both in terms of quality and features) and I’m quite surprised to note that a couple of my suggestions have been incorporated into later boats.

If you visit the Sallow Boats stand at a boat show, you can usually be sure to meet some existing customers who get roped in by Matt to assist with potential customers.

There’s an active “owners association” with a web site that is full of advice and stories and a few brave souls who organise “meets” and the like.