This page commemorates the Holgar, its brave crew and the people that
enabled her to carry her precious cargo of Bluestone from where she was
built in Cardigan, to as close as she could get to Stonehenge

The Holgar is a reconstruction of a Bronze age, sea going vessel, that
would have been used to carry Bluestone (Dolerite) from Preseli,
Pembrokeshire to or as close as possible to Stonehenge, Salisbury Plain.

This page is for the crew of the Holgar, friends and family, and the
general public that may have seen the Holgar on her voyage or that just
have an interest in the Holgar’s dive into the history of one of Great
Britain’s most mysterious landmarks.

(This page is unofficial. It has no affiliation and does not represent the
views or opinions of the Discovery Channel or Darlow Smithson Productions
who commissioned the building of the Holgar for documentary purposes) 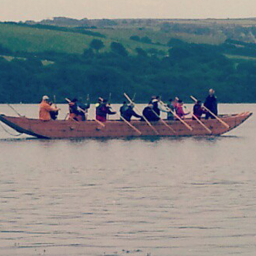